Riding Mounts, most commonly called Mounts for short, are items that can be purchased in the Boutique, or Cash Shop. They are used by the player to travel at much faster speeds. A Mount appears as a beast with the character sitting atop its back. They can only travel on land. Unlike with flying mounts, every race can ride the same land mounts.

Barbarians in Tiger Form cannot ride ground mounts; the mount summoning icon is still active, but an error message is the only result. Switching to Tiger while on a mount unsummons the mount.

Mounts are Pets, and take up a slot in the Pet Bag. They must be fed, and they gain Loyalty Level (Tameness) from Savage to Loyal (Loyal begins at anything over 50% Loyalty level: 501 Loyalty). Higher quality foods will raise their Loyalty faster, but it is a waste to use any of the foods that are used in the Increase Pet Bag Slots quests : Hay, Fruit, Fungus. The timer for feeding again is a minute in duration.

Pets gain levels, usually up to ten or eleven, and each successive level typically has a faster movement speed. The more Loyal the pet, the faster it gains XP. Note that it is time spent mounted, not time spent moving, that increases level. So sit in the Realm of Reflection mounted. Optionally, feed the pet occasionally; it will of course level faster if its Loyalty remains high the entire time, but it will still level even if Loyalty goes to zero, and assuming you can afford the food to raise its Loyalty back, there are no other ill effects to letting it "starve". It is possible to level up while riding; it just seems a lot slower.

The leveling occurs every ten minutes spent mounted, although some Mounts at some levels level every five minutes. XP gain is usually 15 points at Loyal. The XP does not accrue each minute, but is added in one big lump at the end of the ten minutes. With the preference for coders being simplicity, and the big jump visible, there is no reason to assume that time is not counted in increments of a minute; in this event, extra seconds would be wasted.

All pets maintain their Level even when traded. When traded, their Loyalty goes to zero, and they begin Hungry (green icon). 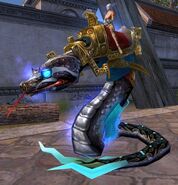 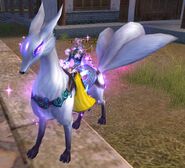