Gate of Delirium (misspelled as Delirum on the official dungeon map) is a large sized instance.

The Celestial NPCs high above Silver Pool give three separate Call to Duty Orders for it.

The first and the second will reward 7,500 XP each, the third 9,000 XP, for a total of 24,000 XP. This instance is very tricky and can be very hard without an experienced group. Treacherous because of exploding monsters and quite large packs of monsters and short monsters hidden behind things.

Call to Duty quests in the early and mid levels need to be activated within a level range, while the special quests in red on the quest list can be completed even much later at high levels, and the tabs that are given by the Call to Duty quests can be used anytime, even by other characters on the same account if traded with an Account Stash.

And now a dungeon map with info for a run. The arrows show the way to the boss and the hatched markings are just traps. You don't have to go there. Also note the alternate path. 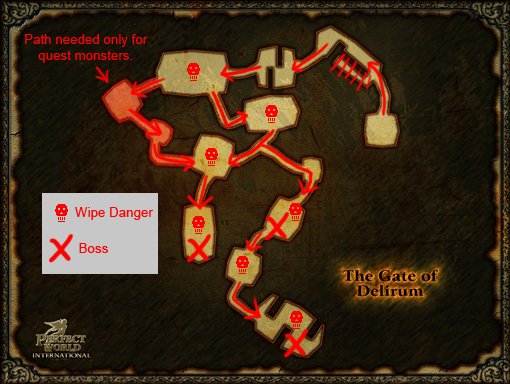 The hardest of them all due to the AoE attack he uses. Clerics -- Stand back. The AoE can kill many people within just a few hits. Try to avoid this. Mostly the clerics who are healing the tank. BRING A CLERIC WITH YOU. Or if you have to venos, use one pet and have both venos heal (if your veno is level 65 or under)

A direct attacker. Doesn't run from you will fight you straight up. Easiest in my opinion to kill. This is the one you run into on the way to Trioc.

The last boss in this place that you will meet. He is a ranged magic attack and will run away. Make sure when you attack him to have him run away into the wall or nook that you will see when you are there. If he runs into mobs, you're making your job harder on yourself.

Solo Venomancers too low level to take on Trioc and his herd of Ladywraiths will have to lure them one by one; an attack on Trioc will aggro them permanently, instead of making them attack only until the pet is dismissed, as is the usual fashion for a pull.