FB 89 for players who have chosen the Sage path; the Demon cultivation is in Eden. Follow the right hand wall to visit all three bosses in the shortest path.

Most of the monsters can be got out of the way of the bosses by giving two Tukang's Wine to the Old Swordsman at the entrance. Mister Tso in West Archosaur gives them for 15 Lumber Essences, 15 High Alloy Steel, 15 Granite, and 15 Extruded Charcoal each.

The entrance is near Immolation Camp in Burning Heart, on the west edge of the map below Thousand Streams. Not to be confused with the Cave of Sadistic Glee

Bosses are encountered in this order:

All three bosses drop skill books and Molds for crafting gear at the cauldrons near the General in Archosaur.

After players complete the BH and go to the Sage NPC to complete the Cultivation, they will probably need to relog before they can use skill books.

The Goblin creatures here, if not others, have been seen to switch targets in what may be an unusual way: if a "puller" character runs ahead and aggroes them by proximity alone, without doing any damage, and another character passes very close to them, say three feet or so, they may switch their aggro to the closer character. 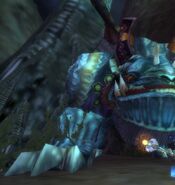 Ethereal Abomination, which may be Bounty Hunter's second quest for level 90-99 characters

Entrance at lower right; players move to the left along the upper edge (right hand wall as players enter the dungeon)