The Head Hunter can now be found at the major cities, near each Teleport Master, as well as in Archosaur.

The Head Hunter is an NPC that gives Daily Quests, the Bounty Hunter quests (or "BH" for short), assassination quests to kill the bosses found in the Fu Ben dungeons. Characters level 40 or higher are able to access a chain of up to three of these boss-kill missions; a new "Bounty Hunter I" that begins the chain can be obtained once each day, starting at midnight PST/PDT. BH II and III are only ever obtained after turning in the previous quest, so turning in the completed BH I quest gives an item that enables BH II to be received, and turning in BH II gives an item to receive III.

Head Hunters are located near the Teleporters for each major city. One which was originally the only Head Hunter is also located high up in the center of Archosaur (554, 653), on the East side of a circular platform with a Warsoul Spirit in the center. The platform is difficult if not impossible to access other than by flying to it.

A different bounty target is offered to each level range, and rewards also vary depending on your level. The quest can be taken several times each day; thrice for levels 40-90, twice for levels 90+. One of the rewards for completing the first bounty in a day is a Bounty Order allowing you to take the second, etc, and these Bounty Orders only last 30 minutes, so take the new quest right away. The higher the Bounty Hunter number (I, II, or III), the lower the rewards.

Despite their colloquial names of "51", "61", etc, the quests are actually grouped by tens of levels, so, for example, Valley of Disaster monsters are offered to players 60 and up.

The new day for Bounty Hunter starts after midnight, as opposed to Meridian and such. 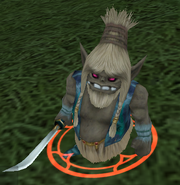 Earthen Dustwraith, with much the same character model as creatures in the the Gate of Delirium FB 39, including Farren Sereneti, one of the targets for BH 50-59

Below are two different approaches to the same process: making it so that you can do all three BHs on one run. They only differ in that the second asks the player to do BH I, go back to the Bounty Hunter, and then do BH II, on the same day, whereas the other does that BH II together with I on the second day. Otherwise they are identical in rewards and successful outcome. Reprinted verbatim from Bounty Hunter @ the PWI wiki
"Stacking your Bounty Hunter quests allows you to save time and money, since you usually only have to do one trip to collect three (or possibly more) bounties per day. New Bounty Hunter quests can be taken as long as you 1) don't already have that quest and 2) didn't already complete that quest that day (with the day ending at midnight, server time).

To stack your Bounty Hunter quests, simply follow these steps in order:

Another advantage to stacking your BHs is that, not only do you save time and teleport fees, but if everyone in your squad stacks their BHs, then you can do the bosses in any order. This is quite useful in, for example, BH51, where doing Wyvern first is quite difficult, or BH59, where being able to do them in any order means you won't have to reset the dungeon for each boss when they happen to all be in neighboring valleys.

The down-side to stacking your BHs? You miss two BH IIIs and one BH II getting everything set up the first two days, which isn't a big deal for most people. Also, if you forget and accidentally turn in a BH I or II twice on the same day, you may waste a Bounty Order. Other than that, it's much faster, cheaper, and less hassle than turning in BHs three times in a row.

If the above is not working for you, the following method may work better. It requires that you do one BH every single day, though, or it lags behind and you end up with the BHs split, getting BH 59 boss Zimo, for example, for BH I instead of Wyvern, the BH 51 boss, with Fushma and Rankar for II and III.

From the PWI forums. Contributor is SolomonSmash on Heaven's Tear. This is arguably more complicated, but it has :

In addition to the above, you will probably want to check the tables on the other PW wiki for the sequence of bosses, since you will probably want to do your BH all in one dungeon, and all of the BHs from level 60 onwards have at least one sequence which includes a different dungeon's boss. Simply start the process only when you are offered a BH I that is part of a sequence of bosses in the same dungeon. For example, if you are level 60, and get offered Zimo as a BH I, you will want to wait a day to be offered Myriad or Fushma. Assuming the sequences are all in the same order, you would in fact want to wait specifically for Fushma so that the successive levels of BHs would also be in the correct sequence.

As opposed to the XP for Crazy Stone and the cash for Jolly Old Jones, the XP rewards are based on the level when taking the quest, not turning it in; if a BH is turned in after the character has leveled into a higher level range, the XP will be the same as the lower level BH.

Twilight Temple bosses are now offered in the 90s levels

Bosses in Warsong City (Snakefist Guardian = "BH Snake", Pavilion of Metal = "BH Metal") and possibly other places have been added to the Bounty Hunter list for levels 100+